SpellBot is the Discord bot that helps you find other players looking to play Magic: The Gathering on SpellTable. It can also be used by event runners to help organize online events on SpellTable. To get started, just invite the bot to your server and send the message !spellbot help.

Just looking to play some games of Magic? These commands are for you! 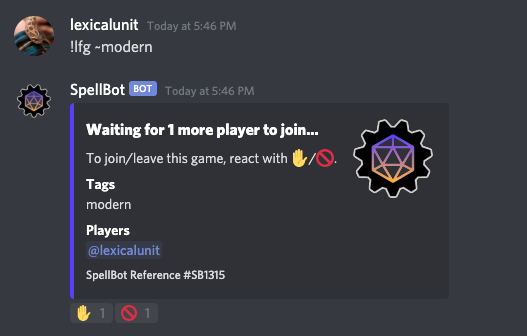 Other users can react to it with the ✋ emoji to be added to the game. When the game is ready, SpellBot will update the message with your SpellTable details. 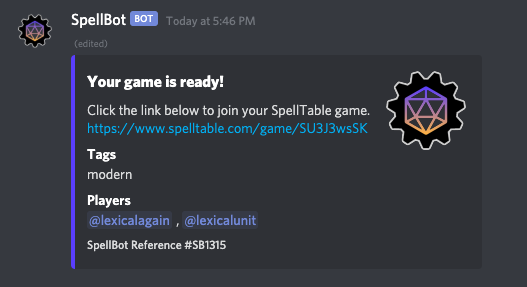 Users can also use the 🚫 emoji reaction to leave the game.

To use the commands for event runners and commands for admins you will need to create a role with the name SpellBot Admin (capitalization matters) on your server. Only users with that role will be able to use these commands. You do not need to give this role any additional privileges.

SpellBot will always try and assume useful defaults or try to do the right thing when you give it a command. For example if you use the tag ~modern or other format names when creating a game, it will automatically assume the correct number of players for you. Hopefully these features are intuitive and helpful 🤞 — and if not, please report bugs and request features to your heart’s content.

Thoughts and suggestions? Come join us on the SpellTable Discord server! Please also feel free to directly report any bugs that you encounter.

I’m keeping SpellBot running using my own money but if you like the bot and want to help me out, please becoming a patron.

If you’d like to become a part of the SpellBot development community please first know that we have a documented code of conduct and then see our documentation on how to contribute for details on how to get started.